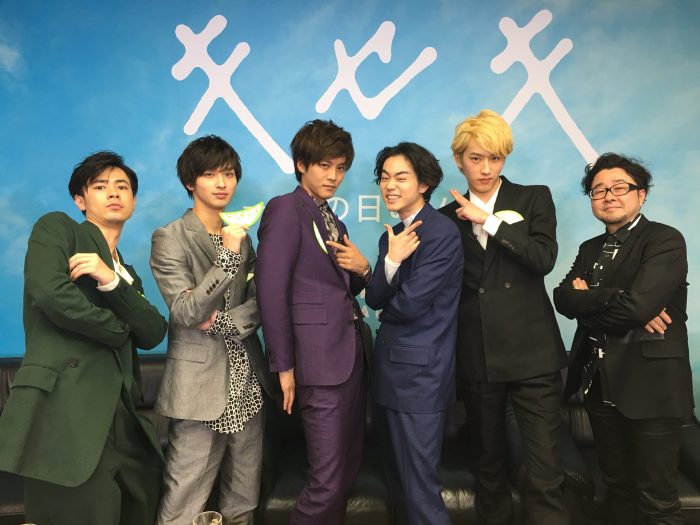 Reposted from [matsuzaka-tori.com]. Will be working on the special premiere which was held yesterday.

Looks like we wouldn’t be getting any reports from the official twitter. Will identify interesting portions to translate from the videos and articles…before the special premiere begins. I’m highly amused by how awkward Matsuzaka Tori was with the 「Kiseki」 sign while Suda Masaki just nonchalantly guided it to his face. Okay, time to sleep before I rave about the pseudo brothers.

From 6:15, Matsuzaka wrote the word, Marriage, for his 「Kiseki」 this year. No, he was not getting married this year. He had a chat with his manager about his female co-stars’ sudden marriage announcements, e.g. Horitaki Maki whom he acted with in 「Umechan-sensei」 and Kimura Fumino in 「Siren」.

Suda: God of Fate.
Matsuzaka: But not for myself. Only people around me.

Watch from 1:12 if you wish to see Matsuzaka trying to expose Suda’s…「Kiseki」 sign which was stuck to his chest.

From 5:22, Suda mentioned that he, together with Matsuzaka, had a meal with Jin (the real producer of GReeeeN) and Hide (the real leader and member of GReeeeN). He found that Jin and Matsuzaka (he called him Tori-kun!) were very similar.

At 0:44, watch Suda exclaimed Saitama Super Arena. He felt great pressure having to perform in front of a huge crowd. (By the way for those who are still in the dark, Green Boys is the opening act for the upcoming GReeeeN concerts in Jan 2017.)

From 6:35, Suda elaborated that Matsuzaka had to grab him for the displayed scene. It caused a bruise which took more than a week to heal.

Suda continued that he didn’t realise that so much force was applied until he was wondering why his chest hurt a few days later.

Matsuzaka: Gomen!
Suda: It’s okay. Even if you apologise, it still hurt. =D But it was a fun scene.

From 3:19, another scene was displayed with kakkoii Matsuzaka/Jin singing. Matsuzaka was told that Jin was a producer so he didn’t need to sing, so Matsuzaka was relieved because he was weak at singing. He turned to the first page of the script, and Matsuzaka/Jin already had to sing. He was deceived awww~ He commented that this time would be the last time (that he would sing). The emcee said that it would be such a waste. Suda added that we should focus on his sexy hands, which Matsuzaka denied, and it went on and on~ I suggest watching Oricon News’ extended version of this portion from 1:20. Suda’s monomane of his sexy hands on the microphone was simply hilarious.

Random, why was Suda the only one wearing sneakers? [/edit2]

[edit] LINELIVE is giving away a signed copy of the premiere booklet to a lucky fan. It has signatures of all the cast members present at the event. Tough luck.